My Polish ex-mother-in-law spent much of the autumn drying the mushrooms she’d collected in the forest in her kitchen. This was done by a humming electric device which blew warm air over them day and night. The electricity cost of such a device prohibitive for me, so tried to find another way, thinking how convenient it would be to have a supply of dried mushrooms.

Tried drying them on a tray on a storage heater, but they were still surprisingly soggy after 24 hours, so put them in the oven, but couldn’t get them to dry evenly – some still soft, some as dry and thin as onion skin – and the oven time was costing me money.

These remains spent another night on the storage heater, but they simply refused to dry out and the whole flat was beginning to smell mushroomy, plus I kept finding bits of mushroom stuck to various surfaces and objects.

I gave up at this point and lot went in the bin, the whole experiment having cost about £2.50 in lost mushrooms and electricity. If I used dried mushrooms frequently they perhaps I’d persevere. However, I’ll stick to fresh. 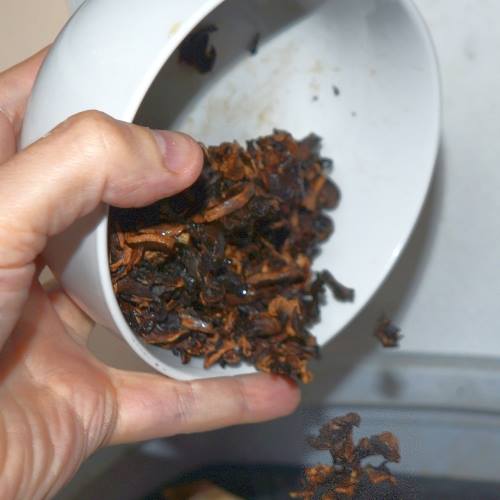